Scaling Up vs. Scaling Out: Hidden Costs

The eternal optimism of the Clear mind

How to announce an event, or, awesome is not always self-evident

The natural evolution from side project to full-time business

Christopher Alexander on the perfection of imperfection

Suspend to disk - does it still make sense?

You can have Plate opening specific URL in a kiosk mode by booting with new url= parameter. To get further control of starting configuration like static IP, put your script under etc/init.d/, make it an initrd and load it by initrd= parameter. 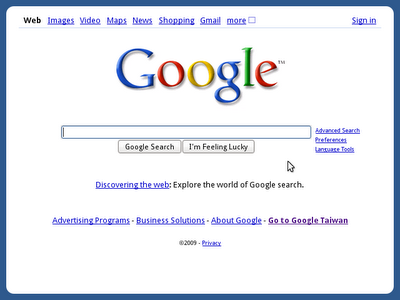 Plate Kiosk Mode has an anti-frame-busting feature for its iframe, still some website like Gmail and Y!Mail doesn't work, as it may violate their terms of service though. 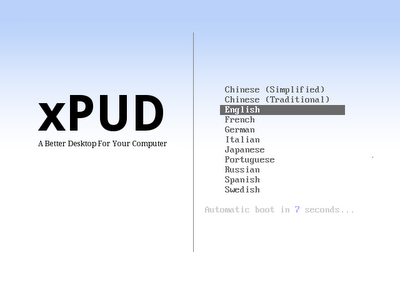 We have upgraded to Linux kernel 2.6.30, also update French, Italian, Russian and Swedish translations thanks to Tristan Velter, Alessandro Arrichiello, Slava Voronzoff and David Eurenius. You can download the latest snapshot build, and post feedback on the forum.

NVIDIA says Windows CE is better for smartbooks than Android

Hire an idiot or two

Linux on a stick

Reminder: Know what you're measuring

Url Shorteners: Destroying the Web Since 2002

Opera Unite: P2P in the browser with a services model

Want The Kindle Source Code? You Can Have It.

Making Use Of Lazarus' Web Interface On Linux Or Unix

The Linux UI future; more complex than ever

An interview with Clem from Linux Mint

Switched On: When netbooks suffer from 'Droid rage

Your branding shouldn't give customers a headache

Mozilla's Jetpack .2 Gets A Boost From The Future

From NeXTSTEP to Cocoa

The Wrong Level of Abstraction

Yum, It's Starting to Get Tasty

It's good sign to see people putting xPUD in daily use, and want to have it like normal system instead of live session. We'll create an unified setting file for xPUD/Plate, and make the setting backup/restore automatically. Also make install/keep/make Opt files as easy as possible.


We'll improve the File tab, try to use a web-based file manager or leverage on Moblin, to integrate it into Plate.


Some other planned features: 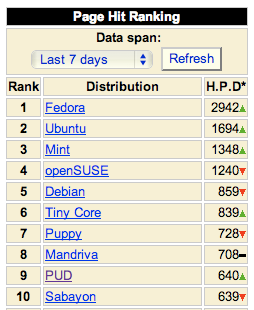 And there are so many in-depth reviews and videos about xPUD:

I read all of them, and mails too,
some of them are translated by Google Translator.
Thanks for your interesting, suggestions, criticisms and feedback.
We're really really appreciated.

How can we scale kindness?

SquashFS: Not Just for Embedded Systems

Why Normal People Don't Use Linux

A LiveCD for Android

男孩吶喊自由鳥 The Boy Who Cried Freebird

"Good enough" instead of "absolutely perfect"

Why it's wise to launch softly 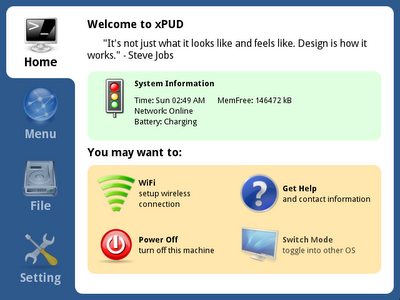 We're proud to announce a new version of xPUD, a small and fast Linux with easy-to-use user interface, is now released. Version 0.9 is full of improvements and exciting new features. 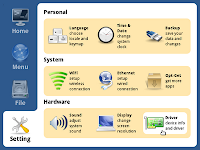 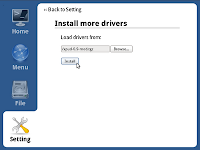 Your hardwares are not working out-of-box? No worries! You can always get more hardware support by installing drivers. 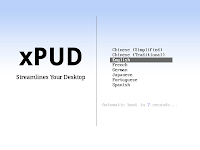 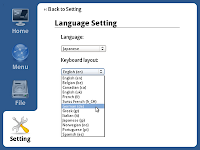 Not in your language? Feel free to send me a patch on translation file!

Plate now has SystemTray that display time, network, battery and memory, also applications can be opened in FullscreenMode. 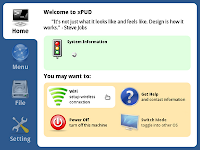 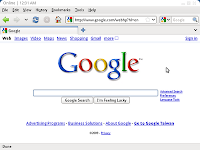 And now you can have PopupDialog. Wifi/Ethernet network manager are greatly improved. Most features really works! 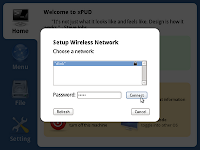 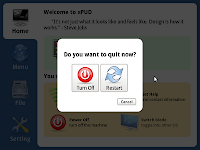 We're now officially supported by UNetbootin, and from this version xPUD can be built as NSIS installer, install on Windows XP/Vista (just like Presto). 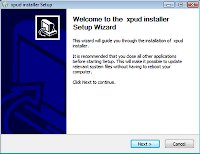 The modulize system, Opt-Get is also improved. You can now build Opt directly from the build system, and there's a developing branch called Core, which is a minimal mode xPUD weighing under 35MB!

Special thanks to these folks (not sorted):And many many thanks for those who tested or reported, let me know if I forgot to name someone. If you want to join us, send me a mail so I can give you a commit bit! 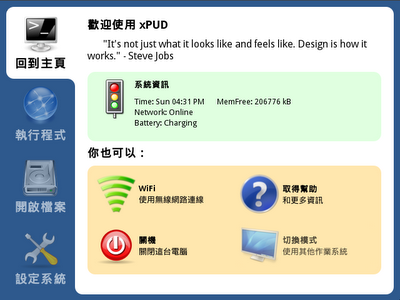 The philosophy of netbooks

EGLIBC: Not a fork, but a glibc distribution

Lots of fixes for Woof

PJ Harvey & John Parish - A Woman A Man Walked By 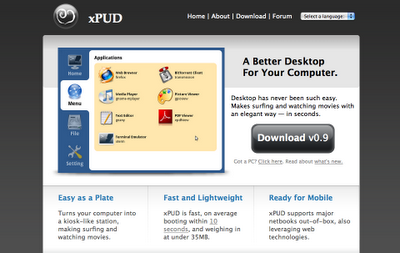 xPUD turns 1-year-old today. I believe we're creating something cool, a content delivery platform that fills the gap between hardware and the cloud. Here are the facts we believed in: What we're working on: Best Regards,
penk
張貼者： Chen, Ping-Hsun (penk) 於 清晨6:34 1 則留言: 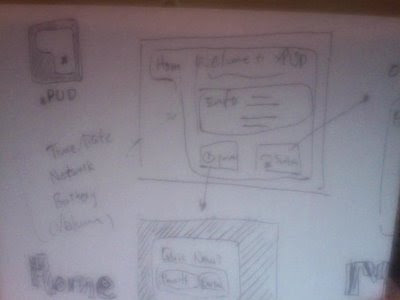